skip to main | skip to sidebar

Back in 2005 I got an invite to test a 250 shifter kart for the first time. It was an experience I will never forget.

Here’s what I wrote back then - 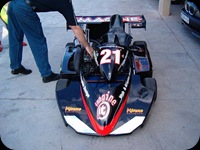 I’ve always wanted to have a go in one of these little rockets, and when the opportunity presented itself when I was offered a test drive in one at Zwartkops Raceway, I grabbed the opportunity with a fat smile, dusted off my old leathers from my bike racing days, removed the knee sliders and squeezed myself into them…

The kart, well it was way different to anything I’ve ever driven before. Even getting into the thing is different, you stand in the seat, lean down on the sides of the seat and work your way down into the kart. The driving position is slightly off-centre, with the Rotax 2-stroke motor under your right arm and the fuel tank under your left arm.

You kinda ‘pop’ into the seat. It has to be very tight, there are no seat belts and even though the seat didn't fit me properly, I felt safe. You literally become part of the kart, even aerodynamically.

Time to start the sucker. Not an easy job. First of all, you need to be Arnold the governor of California to pull the clutch lever that is mounted on the steering rod. I had to use both hands to engage the clutch, then one hand to hold it in whilst hooking first gear. A short push from a pit helper, dump the clutch, fire it up, pull the clutch again and blip the throttle slowly and continually to warm up the motor. 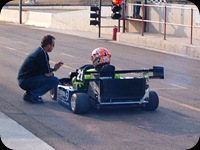 Pit-lane opened and I was told to keep the revs up by slipping the clutch to get moving. If you dump the clutch and you're not in the power-band, it will just bog down and oil up the plugs, so you gotta keep the revs up on pull-off. The little 250cc Rotax twin revs easily right up to 12000rpm and beyond. In fact, it will keep revving 'till the motor pops, and this kart had no working rev-counter, so I had to judge the revs by ear.

Below the power-band it’s weaker than a 5bhp lawnmower and made a stupid prrrr, prrrrr, prrrrr sound, but when the power-band kicked in around 7000rpm it turned into a loud BWAAAAAAAP, change gear, BWAAAAAAP, that sort of thing. It revs helluva quick and you have to be wide awake with quick gear changes or you'll pop the motor.

The acceleration was absolutely freaking unbelievable!

This thing will do zero to 100kmh in less than 3 seconds, with a top speed of around 260kmh, so it ain’t no slouch, but with such a narrow power-band the G-forces will throw your head back and keep it there for as long as you keep your right foot flat. Kinda difficult looking down your nose whilst going flat-out, he-he-he…

There is only one way to drive a 250 kart - flat-out and balls to the wall.

That makes learning to drive the thing a tad difficult. If you go too slow, nothing works like it should. The motor falls out of the power-band, the tyres drop below operating temperatures and you lose down-force. I tried going into corners a gear higher and maintaining high mid-corner speed, like I would in a car, but I quickly ditched that plan because the motor would not pull from low revs. Gotta keep the revs up, gotta stay on the button!

There were other issues as well. With a two-stroke there is no engine braking and no feathering the throttle through sweepers. You will starve the motor from oil and it will seize, so it's balls to the wall and keep it there all the time. That's the only way to drive it. The driving technique is also way different to cars. You finish your braking, gear down quickly, zing, zing, zing and then you're back on the power, hard and way before the apex...

And the brakes, oh man, the brakes are out of this world. Remember what I said about the kart throwing your head back under acceleration? Well, hit the brakes and it's hello whiplash! Fortunately I didn't battle with left foot braking at all. And then there are the G-forces in the corners, my head wanted to fall off all the time.

To sum it up - It's freaking awesome and violent at the same time. I gotta admit I was a tad out of my depth though, with no points of reference to work from, none at all. I didn't know where to brake, turn in, feed the power on etc, but the thing I struggled with most was keeping my damn head straight, literally.

Most radical driving experience I’ve ever had, that’s for sure!

And that was just the beginning.

I was hooked. In fact, I bought the kart that very day and did a couple of Superkart races towards the end of 2005, learned to drive all over again and made a deal with myself that I’d keep at it for as long as it would take to become a consistent front runner in the local 250 Superkart Championship. That little endeavour took just over two years to accomplish.

So, if you ever get the opportunity to drive one of these mental little modified shopping trolleys, my advice to you is buy a neck brace, take some brave pills and go for it! You will never experience anything else quite like it.

A 250 Superkart really is the closest thing that average Joes like you and I can get to what an F1 car must feel like. Some say that 250 Superkarts are actually scarier than F1 cars. Mind you, David Coulthard once tested a 250 kart way back in ‘94 when he was still a test driver for McLaren and said that driving the kart was one of the scariest things he ever had to do…

Posted by pierre martins at 5:57 PM

Welcome and thanks for driving by.

This is just a place where I keep all the tripe I write about stuff that interest me.

If you wanna be included in some way or another, you can contact me on my cell phone or email, or leave a comment.